Of Bins and Worms - Constructing a Flow Through Worm Bin

One of my 13 Skills for 2013 is Composting. I have divided my goal into two parts. One is to construct a vermicomposting (worm) bin for indoor use and the other is to devise a system for handling a large volume of composting materials outdoors. My time frame - doing the indoor bin first during the cold winter weather - to be completed by the end of January and the outdoor composting system to be completed in May.

Why compost? For us there are three basic reasons.

First, I'm pretty attached to the Reduce/Reuse/Recycle mentality. To me it just makes sense, that and the fact we live in rural California and here it's just what we do. Besides that, for many years we hauled our own trash/garbage to the dump, as it was called then, now it is the "transfer station". Not wanting to go there every week, we devised a system where we consciously handled our waste in a manner that limited our need to make a weekly trip. Composting our kitchen and yard waste was a big part of that.

Second, we garden, and it just seems natural to take kitchen and yard waste and turn it into compost. It seems pretty ridiculous to me to send it off the property just to turn around and buy it in nicely sanitized bags.


Even though we have been "handling" our kitchen waste for years, our system was pretty haphazard. I decided this year to attend our Master Gardener's Composting Class to pick up some ideas that would help us do it more efficiently and hopefully with better and faster results. It was there that I was introduced to the concept of worm bin composting. Why I was unaware of this, I have no idea!

The vermicomposting idea clicked with me from the first. Maybe it was my innate desire to "figure things out". Or, that I needed to add another project, whatever, I really wanted a worm bin in my kitchen. Once back home, I did internet searches on worm bins, visited many blogs and websites, and watched tons of Youtube videos, then settled on the flow through system.

I had the need, desire, and a decision on a system. I gathered up the parts, purchased the worms and the remaining supplies, and procrastinated. Finally, at the beginning of February I actually made the bin. Here's the process!

Drill with spade bit - to make holes for PVC pipes.
Saw - to cut pipes and to make bottom door.
Tape measure - to determine placement of PVC holes and door.
Pencil/pen - to draw/mark bin
Utility knife - to make starter hole for door.
Piece of 2x4 wood - to back up bin when drilling
Kitchen Waste Can with lid - 13 to 17 gallons
Coconut Coir - for worm bedding, purchased at Petco
Coffee grounds - used for bedding
Newspaper - for worm bedding
Cardboard - to place on top of PVC to hold bedding
Plain paper - to make door pattern (if necessary) and shape of cardboard for interior of bin
Spray bottle w/water - to moisten newspaper
Cornmeal - for first feeding
Worms - Red Wigglers are the best


My spade bit was sized for the outside dimention of my PVC pipe. It made a hole a tad bit bigger than the pipe, but not enough to be a concern. My bin has three pipes, each about 2 inches apart and 2 inches from each side. The original had the pipes going from front to back, I decided I wanted mine going from side to side for a "cleaner" look. The bottom door on the original was cut to open right to left and I decided that since my bin had an arched indent design three quarters of the way up the front I would follow through with that look and make my arched door open from top to bottom.

First step was to open the coconut coir and put it into a large container and add water to hydrate it as I purchased it in brick form. Rehydrated it made about 8 quarts. Be sure to do this in a big enough container. My first container was too small and so I had to move to a 3 gallon container to finish the project. I used warm to hot water and it rehydrated rather rapidly. Don't use too much water or your coir will end up too wet. It should only have enough water that when squeezed tightly a few drops come out. I LOVE this stuff. Although it is generally used for reptiles, I'm now also using it to start seedlings as it is sterile and therefore safe for that use.


Next, I moved on to measuring the bin and planning for placement of the PVC pipes/holes and the bottom door. The original bin was  white and 13 gallons.  Mine is 17 gallons, with a height of 22 inches and black. Black is supposed to be better from the worms as they like it dark. Worms generally live in about the top six inches of bedding. I calculated that the bottom clean-out area should be about 8 inches to accommodate my hand and a tool to remove the worm castings. There should be a "head space" above the worm bedding of about 5 inches to allow placement of materials to keep the bin moist, to dig into the medium for food placement, to add bedding as needed, etc. That leaves 8 inches for bedding and worms. With that in mind I marked the door opening at 7 1/2 inches - 1/2 inch below the bottom of the PVC pipes. I measured the bin up from the bottom of the bin 8 inches and centered the first hole. Then I measured from that hole 2 inches and marked both additional holes on either side.  With the bin marked I started the process to cut the door and drill the holes for the PVC pipes. I used the paper to trace the decorative front and used that to mark my bottom door. I started the door using the utility knife to make a slit. From the slit I used the saw to complete the cut. To drill the six marked holes, I held the board on the inside and drilled the holes from the outside. Go SLOW and hold the bit straight otherwise it drills too much on one side of the hole and doesn't make a nice cut. Use the utility knife to clean up any unsightly material left behind. Slide the PVC pipe through each set of holes in turn and measure the length needed. The pipes should extend up to about 2 inches beyond the sides of the bin as in time the bin will bow out with the pressure of the material inside. With the correct measurement cut the pipes and then slide into the bin. I didn't use any adhesive between the bin and the pipes as mine fit rather well.


I used a piece of paper to make a rough imprint of the interior shape of the bin by pressing and folding it inside on the pipes. I traced that onto the cardboard to cut out. Not a perfect match, but pretty darn close! Placed inside the bin it holds the initial bedding material. In time the worms will eat through the cardboard and then their castings will be available for removal out the bottom door. Don't moisten the cardboard. It will get wet in time and so doesn't need it now. If you feed your worms correctly you shouldn't have moisture collect in the bottom of your bin - that is a signal that you are doing something right - or wrong with your feedings!


Now your newspaper can go on top of the cardboard. Shred the newspaper by stripping it from the top of the paper along the fold down. It should tear pretty straight. You can also use paper that has been through a shredder. Once in your bin spay it with water from your spray bottle to moisten it.

Give your coir one last squeeze test as it may have continued to absorb water while you were constructing the bin. If it is dry you can add more water and stir it up. I then mixed mine up with some saved up coffee grounds, about 1/4 as much as the coconut coir. When it is mixed, put it on top of the newspaper. If everything looks good your bedding is ready for the worms! Get your worms out of their container. I actually purchased mine from the fishing department at Kmart in five small containers, 50 to a container, 250 worms total. I laid them right on top of the bedding and kind of covered them up with the bedding. You can just put them on top, they will find their way down. 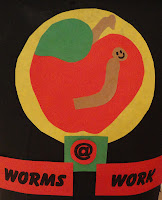 Sprinkle some cornmeal over the top for their first meal in the bin.  Now, cover everything with shredded newspaper that you dampen down well or several sheets of newspaper that you soaked first. This will keep the bedding from drying out.

The last step is to put a sign on the front to keep unsuspecting visitors from putting worm unfriendly stuff in your bin.


Congratulations, if you have followed along, you now own a flow through worm bin!
A couple of notes:

If you buy your Red Wigglers as "composting worms" they will be quite a bit more. My local Kmart fishing department sells the same worms as I would by at the nursery. I know this because I talked to the distributor who sells to both!

I didn't drill any holes along the top of the bin or in the lid of the bin as some people do. My bin has a swinging type lid that I keep cocked open. It gets plenty of air flow. I keep the bottom door open so there is airflow coming from the bottom also. I checked the cardboard today and it is pretty damp, but still there.

I check the top layer of wet newspaper every couple of days to make sure it doesn't dry out and moisten it if needed. It has been three weeks and everything still looks good!


If you have any thoughts or questions, please feel free to leave a comment! =)