The Story of Aunt Jemima - Video Link
I sing. Yes, I sing. Mostly silly songs. I sing silly songs that I make up for the occasion. Any occasion. And my children roll their eyes. My son attempts to cover my mouth. But, still I sing!

This is really true. I can make up just about any song for any topic. Both the lyrics and the music. Later, I never remember them, but it gives me great joy while in the mist of composing and singing.

I also have a collection of jingles that I remember from television commercials while growing up. Perhaps my favorite is the 1967 song from the Aunt Jemima pancake and syrup commercial.

"Aunt Jemima pancakes without her syrup is like the spring without the fall. Only one thing worse in this universe, and that's no Aunt Jemima at all."

I sing it when making pancakes. I sing it while putting the pancakes on the table along with butter and syrup. My children roll their eyes.
But someday, when I'm gone, they will reminisce about how I could make up silly songs for any occasion and they will say, "Remember when she made pancakes, she would sing the Aunt Jemima song? How did it go? Oh, yeah, I remember. 'Aunt Jemima pancakes without her syrup . . . '"

Yep, that's what my silly songs are all about - making memories - one song at a time!

Above image is a link to the history of Aunt Jemima and below is the original 1967 television commercial with the jingle. Just click on the image! 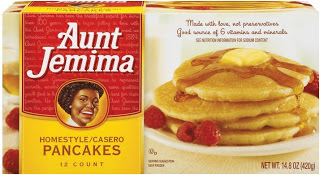